“I’m going to get injured.”

“I’m not fit enough for CrossFit.”

Experienced affiliate owners and coaches have been hearing these myths for years, and they’ve discovered ways to dispel them, helping people confront their fears and insecurities in the process. 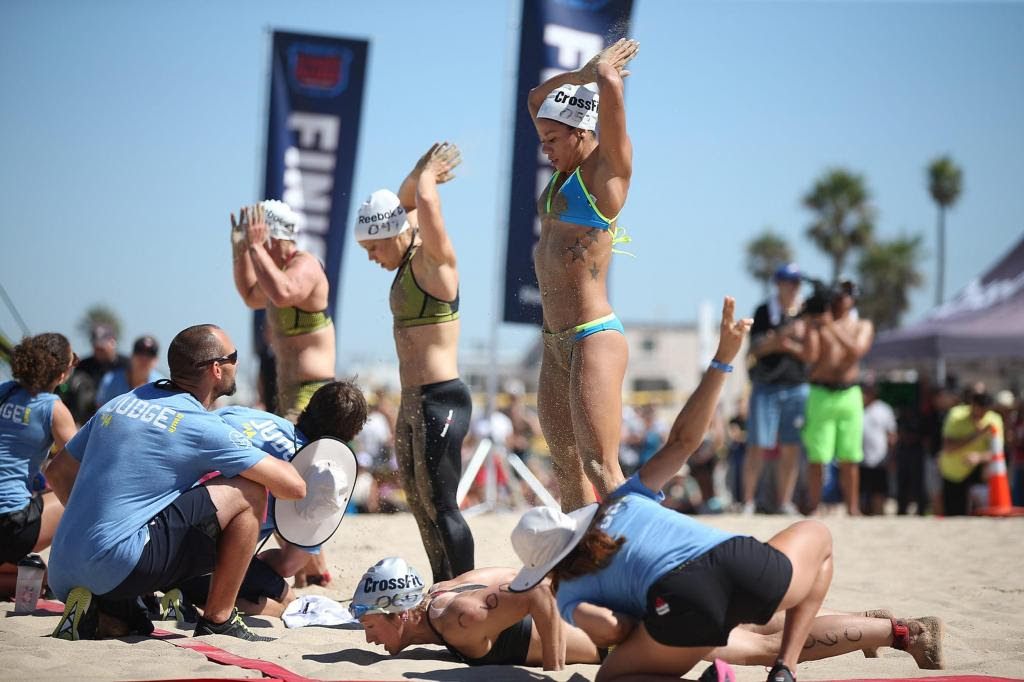 With CrossFit, you're likely to getter stronger and fitter, not bulkier. (Ruby Wolff/CrossFit Journal)

Myth: “I’m Going to Get Bulky”

Chase Knight of CrossFit FIF in Kansas City, Missouri, said he’s had ample experience dealing with people—mostly women—who hesitate to start CrossFit for fear of gaining weight or getting too big or too bulky.

A coach’s instinct might be to reassure the prospect she won’t get bulky, but Knight takes a different approach. Instead of confronting the myth, he confronts the fear behind the myth. Sometimes he even tells prospects they actually might gain weight, he explained.

“I don’t promise them anything. I say something along the lines of ‘What I can say is your body is going to do what it’s going to do through natural growth in CrossFit. If your body has body fat it needs to lose, then it (probably) will. If you are a thin person because you were an avid runner, you (probably) will gain muscle.’” 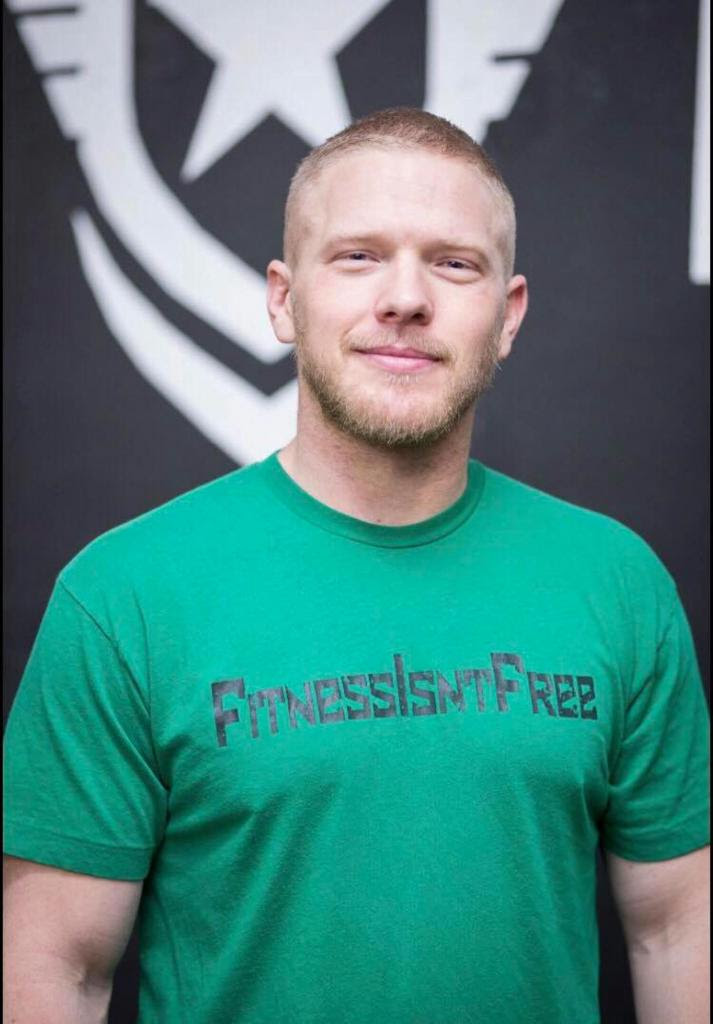 Knight also offers real-life examples of how weight gain can be welcome. This includes telling his own story: He was 160 lb. when he started CrossFit, and today he’s 190 lb.—yet his clothing is the same size and he’s leaner now.

Shane Roehl, the owner of Rivertown CrossFit in Lake Stevens, Washington, said he’s had success dispelling the bulky myth by explaining that bulking up is a conscious decision that requires a lot of effort for most people, and size gain is driven largely by diet, not training alone.

“You will not eat nearly enough food, or enough of the right food, to get bulky,” Roehl said he tells fearful prospects.

“Our program will make you lean and mean,” he adds.

He said he tells the prospect “it’s actually really hard to get bulky. Getting in shape or toned requires some muscle tone … but you won't get huge unless you really try to."

He adds: “If you find out that after eating your regular diet and working out for a few hours a week you gain 10 pounds of lean mass, please let us know how you did it.” 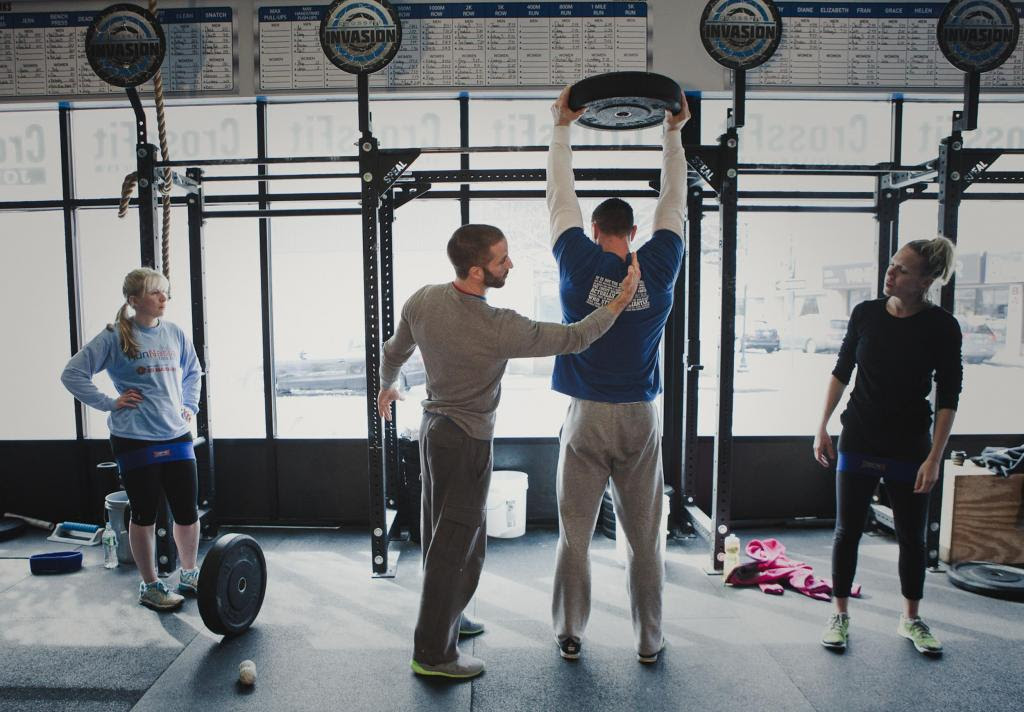 We perform functional movements every day outside the gym, so it's a great idea to learn how to do them properly. (Erica Livoti)

Myth: “I’m Going to Get Injured”

Fear of injury is sometimes the elephant in the room, and it needs to be addressed, Roehl said.

Roehl said he doesn’t promise the prospect anything because injuries can happen anywhere—at the gym, skiing, hiking, getting out of bed or in the shower. Instead, he explains it’s his job to help the client become healthy and fit through constantly varied functional movements to decrease the chances of injury.

“Injuries tend to happen when folks are attempting movements they either don’t fully understand or don’t have the capacity to perform due to some sort of physical limitation. It’s my job as coach to show you how to perform these movements to your ability in a safe and effective manner so you can do this for a long time,” he said of how he talks to a new prospect. 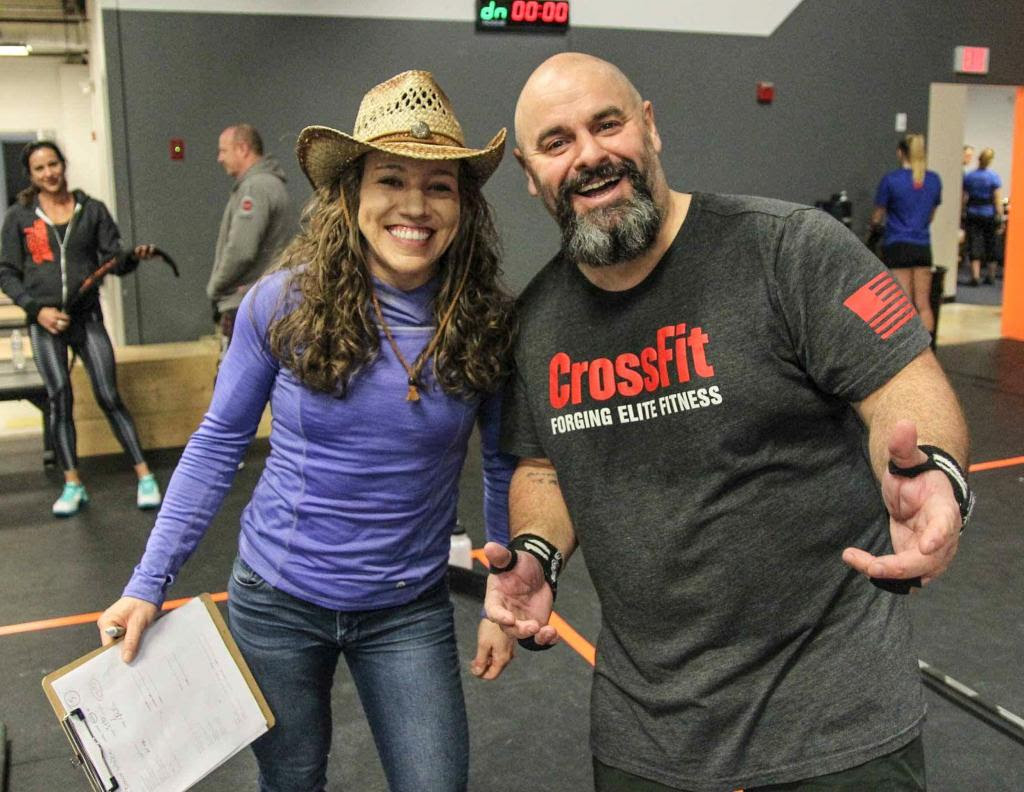 Karen Clark, the owner of CrossFit Amoskeag in Bedford, New Hampshire, also explains to her prospects that becoming more fit through CrossFit will actually make you less susceptible to injury.

“I rely on the foundations of CrossFit and the sickness-to-fitness continuum: The more strength and flexibility you develop, the more likely you will be to avoid serious injury,” she said, referencing the Sickness-Wellness-Fitness continuum outlined by CrossFit Founder Greg Glassman in the 2002 CrossFit Journal article “What Is fitness?”

In fact, Clark said, most injuries she sees happened outside CrossFit and could have been avoided if the body were better prepared.

“Every day, we are at risk of being injured. The stronger we are, the more resilient we are to injury as long as we remain within our ability levels and trust the process,” she said she tells prospects.

The other side of the fence comes down to the prospect’s personality. A willingness to be humble is necessary to avoid injury, Clark explained.

"For potential CrossFit (athletes) with this fear, it becomes a question of 'will you check your ego at the door? It can be difficult to balance competitiveness with checking the ego, but your coach should be there to help you through.'" 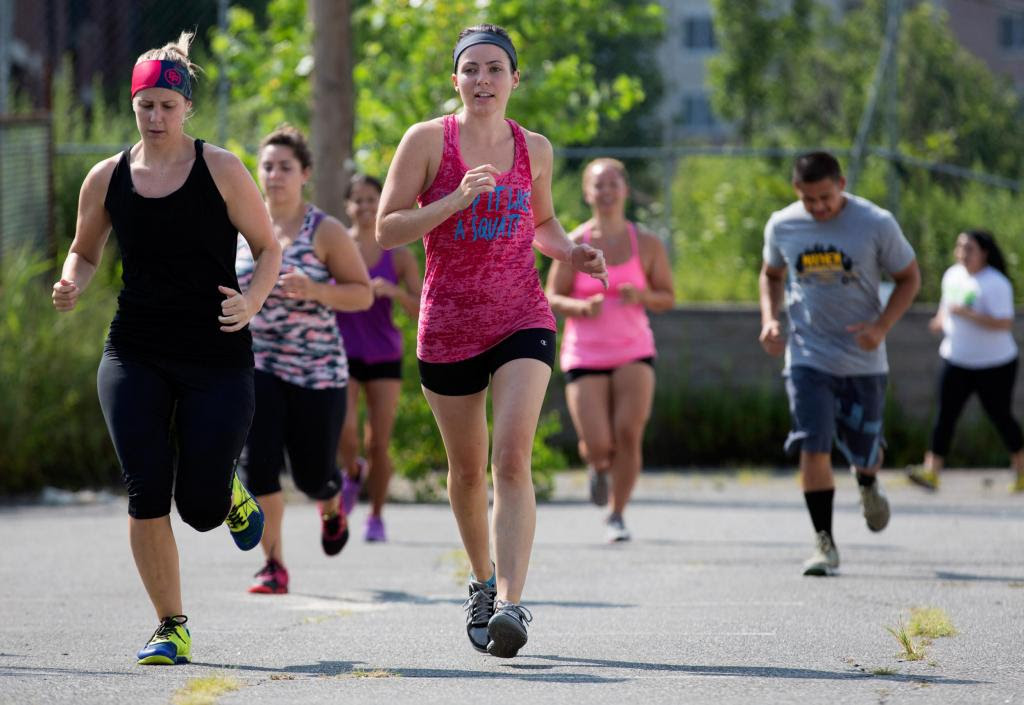 You don't have to be fit to start. You just have to start to be fit. (Jeff Rhode)

Coaches say dispelling the I’m-not-fit-enough myth largely comes down to educating prospects about the exact process they’ll go through if they join.

For Chris Collins of CrossFit Basingstoke in Four Marks, Hampshire, England, education starts the moment clients walk through the door.

“We have had this (myth) a lot,” he said. “We cover this in their first-day experience with us. We give them examples of the range of our members, highlighting age, size (and) physical abilities. We also then educate them on the way we program our WODs (and) how every one of them is scalable.”

Collins explained that outlining the process helps them realize they aren’t being thrown to the wolves: Fundamentals come first, and new clients join the group classes when they’re competent in all movements and have an understanding of scaling.

“This seems to put their mind at rest,” he added.

Roehl, on the other hand, looks the client in the eye and asks a question: “Fit enough to do what? Murph? As prescribed?”

He continues: “No, you’re certainly not fit enough to do that. If I’m honest, neither am I. You are, however, in the perfect place to change your life for the better.”

Roehl said he then explains that improving health and fitness is a slow, gradual process that starts when an athlete learns what his or her body is capable of. 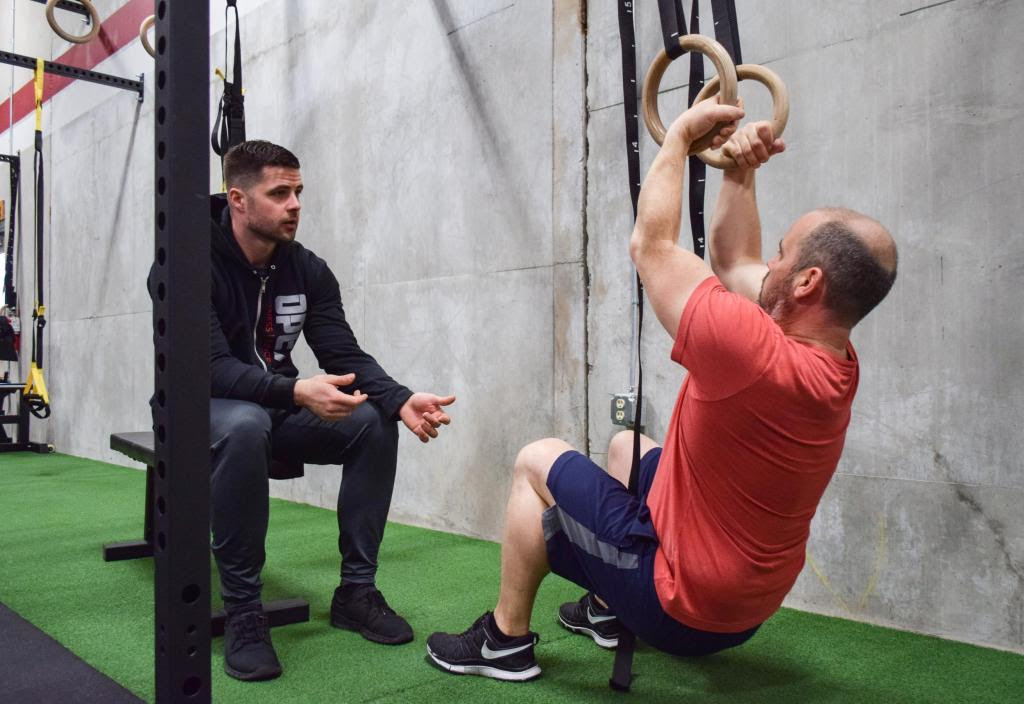 Meanwhile, Joseph McGowan of CBT CrossFit CrossFit in Salem, Oregon, has had success dispelling the myth by emphasizing the coach’s role in the process.

“I had a client who had never worked out, and the sound of bars banging on the ground was enough to make her jump. What helped her make her decision to sign up was the fact that she would have a trainer that would be working with her three days a week, guiding her, encouraging her and congratulating her along the way,” McGowan said.

He added: “Showing the process we take of going through a three-day assessment and building programs that are tailored to each person’s skill level takes the edge off for most people.”

McGowan explained he also dives into the concept of graduating from one movement to the next only when clients are physically ready.

“It helps paint a clear picture of what they can manage with their current fitness level,” he said. “Plus having some goals around the next level of movement they can work toward helps fuel their fire to get better sooner rather than later.” 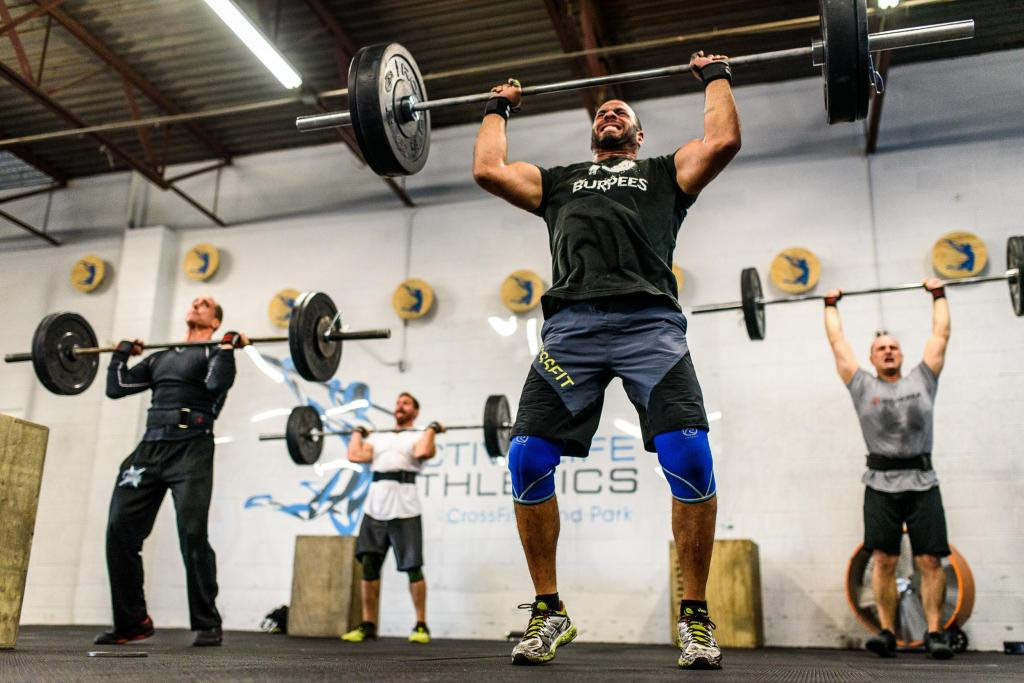 One Size Fits None

Though coaches have developed language and collected examples to dispel myths about CrossFit, Knight, a former interrogator with the United States Army, said it’s most important to individualize your approach and avoid becoming too attached to any one strategy. It comes down to communication skills.

“Where I see other coaches (and) owners fail is their ability to relate to that potential member. They might be a fantastic coach, but if you can’t interact with people, you will never have them as a member. You need to address their concerns specifically. Similar to cueing a movement: One cue might work for 10 athletes but not (for) the 11th.”

Knight added: “When I encounter hesitation or some kickback, I have to understand why, and really that’s the rapport-(building) stage. I like to get to know them, their hobbies, likes, dislikes. From there, it allows me to formulate a response that would best suit them.”

Thus, if you struggle to dispel the myths fearful prospects carry with them, it might be time to look at yourself and then develop new tools to help you connect with the person coming to you for help, Knight said.

“Once you’re trained in those skills, it’s a hard thing to turn off.”

About the Author: Emily Beers is a CrossFit Journal contributor and coach at CrossFit Vancouver. She finished 37th at the 2014 Reebok CrossFit Games.

When I was in school I skipped sport classes because I hated them. I completely avoided all sports. This is the longest relationship I’ve had with a gym! Today, people rarely work toward future improvements and I am no exception. But, in addition to the long-term benefits, Replay gives me instant rewards, too. Everybody wants the long-term benefits of CrossFit, but that is not what keeps me coming to the Box almost every day. What keeps me committed is the way I feel every time I come to Replay CrossFit. When I am in the Box and I listen to the Coach teaching me something new, I feel like a child: curious, trying to understand, attempting to learn. When I train I forget I have a job, tasks, chores, other roles in society. For one long moment, I am the sole inhabitant of my body and my mind and there is nothing more important than being my best self, physically and mentally. And when I finish training I feel like I did the best thing I could ever do with my time. When I see my small improvements, I acknowledge that every drop of sweat mattered and that I am constantly evolving for the best. And this is the GREAT lesson: If you want something, you must persist and it will happen for you.

For several years, I've been collecting gym subscriptions and not using them due to the boring "flatness" of the exercises. At Replay CrossFit I have found a new dynamic approach to my workouts - it's all about biomechanics and endurance of every dimension of your body. It was challenging in the beginning, but once you get to know the technique, there's nothing stopping you... only yourself! The classes that I've taken boosted my energy, accelerated my weight loss and muscle buildup in a sustainable and fun way. The community is awesome and always very supportive.

I recently went to Replay Cross Fit and as a former tennis player, I found it to be a much better than going to a regular gym. I love how challenging it is and how it keeps me motivated to become better with every workout. My favorite exercise is wall balls and my least favorite has to be burpees. Hands down! My goals are to improve my upper body strength, become stronger overall and just have a healthy lifestyle. This brings me to another great thing I love about Replay CrossFit --- I love being part of an awesome and supporting community that shares the same goals.

We use cookies to enable your best experience.
By remaining on our website, we assume you're ok with it.

Getting #stronger starts with one class, one Monday!

You'll also get some cool stuff delivered to your inbox from time to time.
Don't like it? No problem. You can unsubscribe with one click.